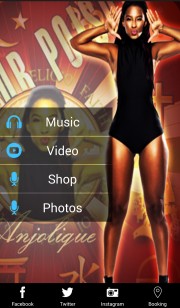 Anjolique releases new mobile app On the GooglePlay Store. Now fans can interact with the rising star more than ever by downloading her new mobile app.

Miami, Florida, January 5, 2015 (Newswire.com) - Pantheon Elite Records has shown a big commiment to the rising star by releasing the Anjolique mobile app. Download the official Anjolique Mobile App and carry all of her latest songs, videos, news, pics and fan gear with you everywhere! You'll be the first to know about tour dates, promotions, releases and other exclusive content that is not available on the web.

This is a huge leap in marketing for Anjolique and will give her fans direct access to the singer/songwriter. When asked about how she felt about having her own mobile app Anjolique said "I am so honored to be a part of this journey and blessed to be able to have the ability to interact with my fans on a personal level."

Anjolique releases new mobile app On the GooglePlay Store. Now fans can interact with the rising star more than ever by downloading her new mobile app.

The COO of Pantheon Elite Records, Billy Carson says "Having your own mobile app is a game changer. If we have 100,000 users then we have 100,000 potential instant buyers when a new album, single or merchandise becomes available. The app will give us the ability to communicate directly to the users and notify them of tour dates, ticket availability and merchandise."

The mobile app is currently only available on GooglePlay which will work on over 5500 different types of devices and tablets. The iTunes version is set to be released some time by early Feburary. The future looks bright for the rising star. Pantheon Elite Records and Anjolique wants everyone to download the app and give it a 5 star rating.