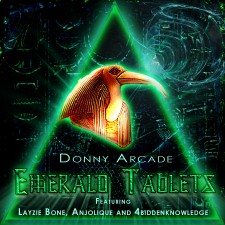 Donny Arcade is a conscious rapper that has put together a menagerie of incredible talent on his single Emerald Tablets, from the up and coming album entitled "We Are Not Alone". This production is on the same level as some of the biggest names in the industry! Donny's amazing ability to network and his incredible musical talent create the perfect storm for success.

CLEVELAND, June 17, 2016 (Newswire.com) - Donny Arcade is a rapper known for his conscious approach to the art form known as hip hop and rap. He takes messages from the past and ties them lyrically with concepts of ancient Egyptian characters making for a history lesson and very feel good music. Which is something this world could use given all the non educational material we have to choose from.

Recently Donny Arcade teamed up with Bone Thugs-N-Harmony rapper Layzie Bone, Anjolique and 4biddenknowledge AKA Billy Carson for his new single “Emerald Tablets” which his record label dropped this past week via the Pantheon Elite Records YouTube Channel. The song has acquired almost 100,000 organic views! This is good for unsigned artist on YouTube and the Layzie Bone feature is definitely not a bad look. Even better the song is well produced and breathes a breath of fresh air with each bar dropped and each conscious lyric delivered through Donny and his multi talented featured guests. The producer of Emerald Tablets is none other than LT Moe formerly of Aftermath where he worked along side Dr. Dre.  LT Moe has produced hit songs for Snoop Dog and the Dog Pound, Ludacris, Chingy and Avant just to name a few.

The song is well produced and breathes a breath of fresh air with each bar dropped and each conscious lyric delivered through Donny and his multi talented featured guests.

Donny Arcade has recently released 4 rock solid singles from the album "We Are Not Alone" in an effort to build a following before the album drops. Pantheon Elite Records plans to release the album some time this fall. Don Johnson AKA Donny Arcade is also a budding actor! He has a role as Ravenger in the up and coming $100 million dollar movie  by Marvel entitled "Guardians Of The Galaxy Vol 2". Some of the "A List" cast include Vin Diesel, Zoe Saldana and Kurt Russell just to name a few,

Check out the lyric video for Emerald Tablets by Donny Arcade featuring Layzie Bone below and be sure to follow Donny Arcade on social media @DonnyArcade.